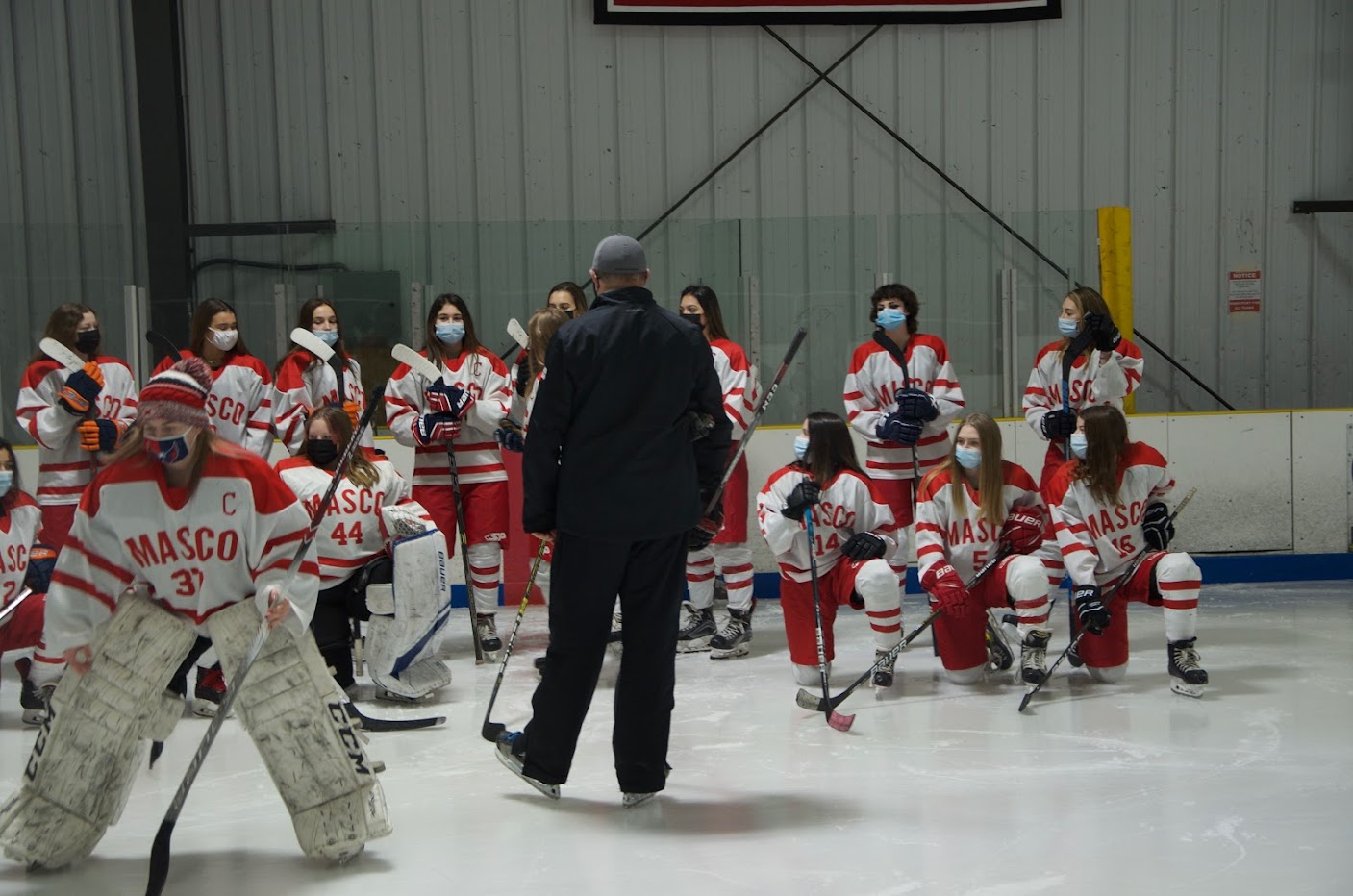 Head Coach Ryan Sugar takes on his fifth year as the head coach of the Lady Chieftains. In the past 4 seasons, Coach Sugar led the team to Northeastern Conference titles and two state semi-finals. Ryan was the captain of the Wakefield High School Hockey team and also played a PG year at South Kent School where he was named to the New England all star team.  A knee injury cut short his college career.

Ryan graduated from Salem State University with a BS in Sports Management and is a Physical Education Teacher at Proctor Elementary School, Topsfield. Ryan lives in Danvers with his wife Lindsay and his two young daughters and their new puppy Stella who is already chasing pucks too.

Rachael was a stand-out defenseman during her four years on the hockey team. As she entered her senior year on the MASCO Varsity Ice Hockey team Ryan Sugar began his first season as head coach. During her senior year, Rachael earned a spot and was selected to play in the league’s all-star game at Salem State University and was voted onto the all-conference team. Additionally, Rachael was part of the team famously dubbed “The Cinderella Story” of the 2016-2017 season state tournament, with an amazing, historic run to the semi finals despite their 18th seed placement. They were the very first Masco girls hockey team to win a state tournament game and then pull off two more upsets to go on to compete in the state semi-final!

Coach Duvall knows what it takes to compete and win, she brings experience and is looking forward to getting out on the ice this season with her team to show them that with lots of hard work, a never quit spirit, team play, perhaps against the odds her team can earn their spot at the top again.

Coach Jones is returning for another season as Assistant Coach with the MASCO Girls Ice Hockey Program. Alex was a five year starting goalie at MASCO!! Through hard work, attention to detail, and endless, rigorous training people noticed. Alex, while still in middle-school, earned the ‘call’, and received a waiver to join the MASCO High School Girls’ Varsity Hockey team, as an 8th grader. As a Sophomore Goalie her teammates voted and chose Alex as their team Assistant Captain.

Alex, with amazing performances game after game, continued to lead her team during her junior and senior years as team Captain. She was a four time All-Star and in 2013 was chosen as Player of the Year during her senior year. Alex still holds the team shutout record and also has two thousand five hundred (2,500) saves.

Alex went to Norwich University to play between the pipes for the Cadets. Unfortunately, her college hockey career was cut short by a knee injury but she worked through it, never quit, and graduated in 2017 earning a health science degree. Still not done, Alex then went to Massachusetts College of Pharmacy and Health Sciences (MCPHS) University in Boston, MA for nursing and graduated in 2019.

Coach Jones currently works at Tufts Medical Center as a neurosurgery and trauma nurse and continues to give back as a MASCO Youth Hockey Lady Chieftains coach and mentor to young ladies that are chasing their dreams to play for MASCO High School Girls’ Hockey someday too.

Fifth year coach, Ryan Sugar, continued the State Tournament appearance streak to make it ten years in a row for the program. Expectations are high for this year’s squad as they seek to defend their Northeastern Conference title (4 years running) and take yet another run at qualifying for the State Tournament.

With some talented Freshmen coming in, adding to his returning skilled and highly competitive Varsity Squad, Coach Sugar is looking to lead the team deep into the tournament again this year. They made it to Championship Rounds last season, stopped short with COVID cancellations, and will be looking for more this year. The Lady Chieftains have high hopes for this season.

Please click here for access to the Sew Forth online store to buy Masco hockey gear.
Scroll Up